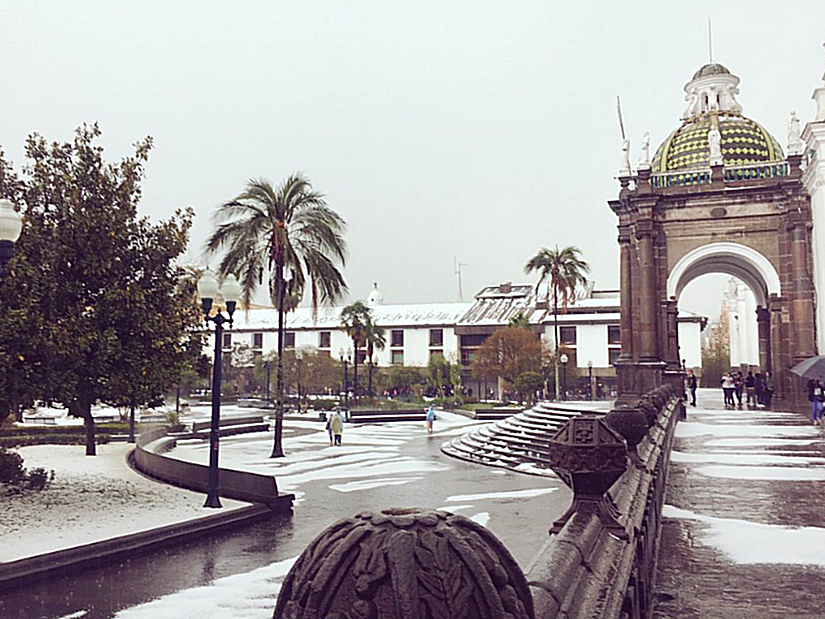 By being located on the equator, Quito has always been a city of a very unpredictable yet at the same predictable weather. Due to its location our summers are made up of bright skies and warm weather whereas our winters are accompanied by heavy rains for two hours and then clear skies. Even though we may encounter different temperatures with different wind currents and skies, there is not much change to be expected.

Our winter wonderlands that we saw on all romantic movies had to be narrowed down to a walk under the rain in downtown Quito. Of course it is not like we hate our winters because it is especially during these times where the skies become even more beautiful and breathtaking once the storm, which usually does not last for a long period of time, has ceased.

However in the middle of November, the entire city had been experiencing certain casualties when it came to the weather. For instance, the wind got a little bit less predictable than usual and the rains were sometimes a little heavier and chillier than what we had expected. One afternoon however the whole capital was struck by what seemed just a heavy rain or as we all call it “aguacero” which can be basically interpreted as a rain that will soak you entirely, so you should better stay inside! Well what seemed just a rain turned into hail.

There are indeed some days in Quito where we experience hail. Nevertheless the one from this time was different because it did not stop for a long period of time which meant that little by little the city was starting to get covered in white.

What is nice to learn from this is that while this was happening many people’s faces changed and reflected so much happiness. Although everyone knew that it was hail and not actual now, they all at the same time imagined it was for a little while. In that moment, in those hours, the whole city was in fact having their white wonderland.

And so the hail stopped and the downtown area of Quito was covered in white. The colonial houses transformed into the little houses we all used to see inside the snow balls we had back at home. The city looked beautiful and everyone felt it. Looking at Quito from that perspective, changed the citizens for a while.

Unlike many other cities in Europe, southern America or North America where snow is something so common and casual to see. For the people in Quito it wasn’t and as you might already know it is not like everyone in the city or perhaps in the entire country have ever experienced or felt snow ever.

Hence what you could see during that evening on the streets was innocence, vulnerability and pure happiness. Kids, parents, families and friends all went out and immersed themselves in their white wonderland. Many people started to make their snowmen, others started to joke about it by setting some beers into the snow and waiting for them to be cold and ready to be enjoyed. Pictures and family portraits were taken by many. Regardless of who you were and whether you had experienced the feeling of snow with you, being there at that time was a true experience. The whole ambiance of the city changed, one could sense the emotions being evoked by the citizens while enjoying a beautiful view that has not been able to be seen in centuries in the beautiful city of Quito!

It is in these moments where we cherish the innocence in people and how happiness is so relative. That is Quito and that is Illa, two places connected to each other reflecting uniqueness and naivety that turns into the most magnificent and pure beauty to exist.